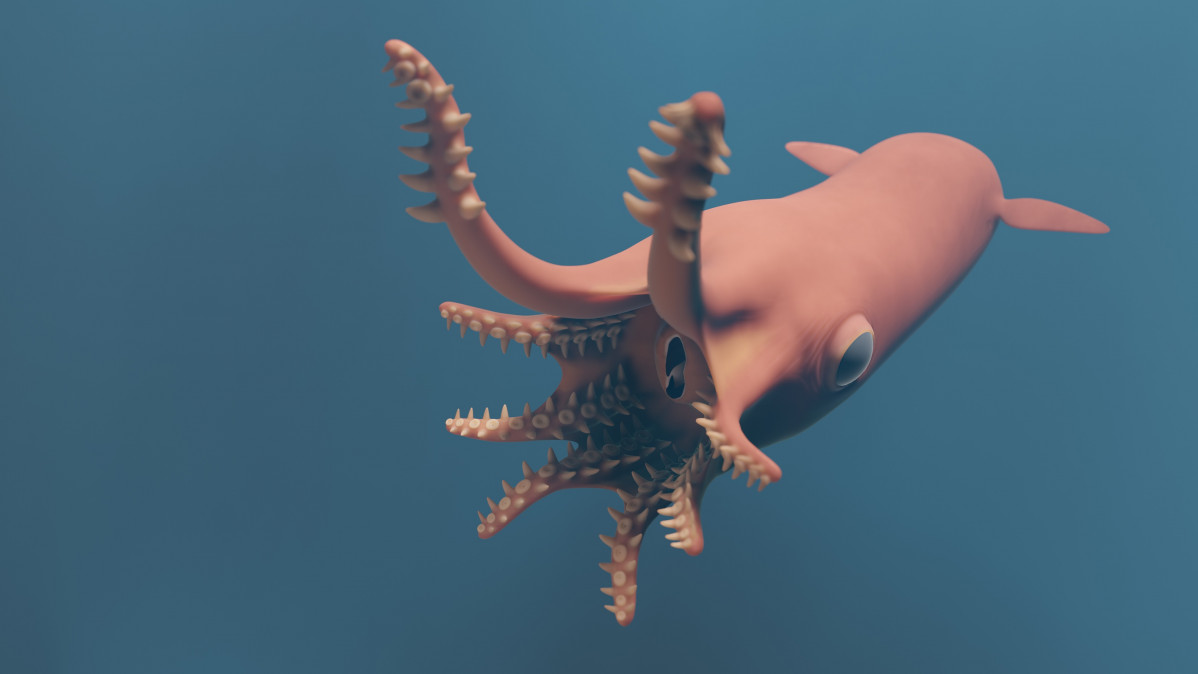 The modern vampire squid is a cryptic creature. It lives a slow life deep in the ocean — far from shore — where it makes a living by scavenging on whatever dead things happen to sink past it on their journey to the ocean floor.

Was life always this way? That’s a hard question to answer for animals like squid, octopuses, and cuttlefish because those creatures (a group of evolutionary cousins called “coleoids”) are defined by what they don’t have: a hard shell. That means they don’t have body parts that lend themselves to becoming a fossil. Conditions have to be just right for a coleoid’s soft body to make it into the fossil record.

That’s why a new paper, published Thursday in the peer-reviewed journal Scientific Reports, is a big deal. Paleontologist Alison Rowe and her team used 3D imaging to analyze rare fossilized remains of an extinct relative of the vampire squid. Their findings suggest that Vampyronassa rhodanica may have been a bit more, well, vigorous. Their results point to a fearsome eight-armed hunter that likely captured prey with a pair of powerful suction cups.

Interesting Engineering sat down with Rowe to discuss the study, what they learned about Vampyronassa rhodanica, and what that new information reveals about the ancient oceans.

Interesting Engineering: How did you and your co-authors carry out this study?

Alison Rowe: In this study, we utilized powerful X-ray imaging techniques to scan fossil and modern specimens. This allowed us to observe previously unseen internal structures of the fossils, as well as view the external soft tissue anatomy with much better resolution.

From the comparative analysis between the fossil and extant form, we can show for the first time that there was a combination of anatomical characters in V. rhodanica that aren’t seen today. This research provides a small window on the diversity of character combinations that occurred in the Jurassic that are now lost.

IE: In the paper, you compare V. rhodanica to the modern-day vampire squid. For context, can you give us a crash course on the vampire squid and its relatives?

Rowe: The vampire squid is actually not a squid. It is closer to octopuses than to squids.  Like the octopus, it has 8 arms, but also two filaments that are developmentally homologous to arms, which makes it somewhat comparable to squid or cuttlefish (Decabrachia) that have 10 arms. It has cirri on the arms like the incirrates [a suborder of the order Octopoda]. It has its own characteristics such as its type of sucker attachment, and its gladius, which is a kind of internal organic shell.

It is uniquely adapted to living in the deep sea, often in areas of low oxygen, and is an opportunistic detritivore, feeding on organic material falling through the water column.

IE: What samples did you use for this study?

Rowe: We reanalyzed 3 fossil specimens of Vampyronassa rhodanica and 2 extant samples of V. infernalis [the modern-day vampire squid] from the collections at the American Museum of Natural History and the Yale Peabody Museum. We also compared these specimens with other fossils from the literature.

IE: In the paper, you describe a reanalysis of the fossils using modern techniques. When was the original analysis and what did those investigators find?

Rowe:  The initial description of V. rhodanica was by Fischer & Riou in their 2002 paper. At the time of publication, the authors had to rely on observations of the external form for their anatomical descriptions. They were able to describe many external features, and based on this they positioned this species as the oldest likely relative of the modern-day vampire squid (V. infernalis).

IE: What new tools did you use to analyze these fossils two decades later?

Rowe: We chose to reanalyze some of the Vampyronassa rhodanica specimens described in the 2002 paper using powerful X-ray-based imaging techniques at both the Muséum national d’Histoire naturelle in Paris and the European Synchrotron Radiation Facility Synchrotron (ESRF, ID 19 beamline, Grenoble, France). We used these same X-ray techniques at the American Museum of Natural History on the two modern vampire squid.

Using these data, we were able to identify the boundaries of anatomical structures and reconstruct them in 3D.

IE: What did that analysis reveal?

Rowe:  The results were exciting. For example, the kind of resolution we were able to get on the suckers of V. rhodanica was completely unknown before the acquisition of this data. We were able to determine that the sucker attachment of V. rhodanica is the same type seen only in modern V. infernalis, though the overall shape is of the sucker itself and reflects those of octopuses.

IE: What do those findings suggest about V. rhodanica‘s life and behavior?

Rowe: Though we obviously can’t observe how V. rhodanica used their suckers. By comparing preserved anatomical features with that of coleoids today – suckers and cirri for example – and knowing how they function now, we can infer how the same features may have been used by the Jurassic V. rhodanica. Based on functional comparisons with modern coleoids, the combination of characteristics observed in the arm crown of V. rhodanica, as well as their streamlined, muscular mantle, suggest they were adapted to a pelagic, predatory lifestyle.

IE: Were you surprised? Were your findings consistent with the original analysis?

Rowe: The soft tissues of modern coleoids hold a lot of information about their lifestyle, though this is rarely preserved in fossils. Based on previous work we had a sense of the external characters that had been preserved, though the resolution with which we could see the detail of these tissues in the scans was fantastic.

IE: How do your findings change what experts know about V. rhodanica? Do they offer clues about its broader environment or ecology?

Rowe: The lifestyle of V. rhodanica is in contrast with that of the modern vampire squid. It is unclear when the adaptation to the deep-sea lifestyle occurred in the lineage, though recent work has described a fossil species of this family inhabiting this environment in the Oligocene, around 33.9 to 23 million years ago. The initial shift from shallower to deeper waters was possibly driven by competition in onshore environments. The mosaic of characters found in the coleoid taxa at La Voulte-sur-Rhône (V. rhodanica and other species), suggests that Mesozoic coleoids co-occurred in different ecological niches during the mid-Jurassic.