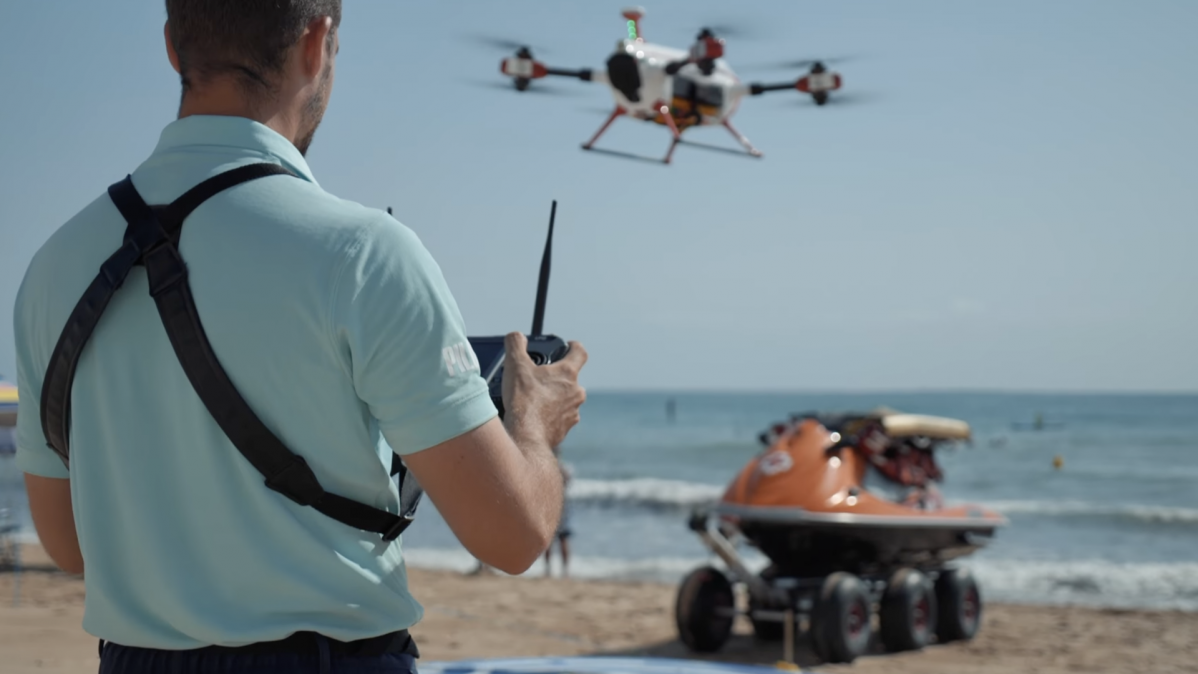 A drone helped save the life of a minor struggling in the waters off the coast of Sagunto in Valencia, Spain, a report (in Spanish) from El País reveals.

The incident occurred last Friday, July 1, when a 14-year-old boy went swimming at a beach while yellow flags were flying — meaning swimmers should be cautious when entering the water.

Unlike lifeguards on jet skis, the first responder drone didn’t need to navigate rough waves, meaning it could deploy a life jacket in a fraction of the time.

The boy’s rescuers explained that he was struggling to swim back to the beach due to strong waves and currents at the time of the incident and showed signs of exhaustion. That’s when technology came to the rescue.

The local lifeguard service sent a first responder drone donning a life jacket to the boy in a quick response that likely prevented the matter from becoming grave. A video shared by the lifeguard service shows how the boy struggled to pick up the lifejacket — which eventually kept him afloat — in the rough waters. Shortly afterward, two responders arrived at the scene on a jet ski with a stretcher attached to its back. With some difficulty, they managed to get the boy aboard before taking him back to the shore and safety.

After the ordeal, the boy was admitted to the local hospital, where he remained for the night while checks were carried out. He was discharged the following day, Saturday, July 2. Watch footage of the rescue below via La Vanguardia.

The mayor of Sagunto, Darío Moreno, told El País that this was the fifth rescue carried out this year by the region’s first reponder drones. The Spanish municipality of Sagunto has been using the flying machines for emergencies and first response since 2017. “Since June, we have seen five rescues in which life jackets were quickly deployed from the air while lifeguards made their way to the scene,” Moreno explained.

The latest rescue incident isn’t the first time the use of drones has made the news in Spain this week, after the Spanish National Police announced it had seized three underwater drones built to smuggle drugs across the Strait of Gibraltar, near the city of Marbella.

The Spanish startup behind the drone rescue service, General Drones, was co-founded by Adrián Plazas, a former lifeguard. Plazas told El País that he could see on the drone’s camera feed the boy was exhausted and was showing signs he might drown before the drone threw down the life jacket attached to a cord. The cord allows the drone to keep the life jacket from being dragged off by the current, and it can also winch it back up if required to drop it nearer struggling swimmers.

Plazas says he and co-founder Enrique Fernández were partially motivated to find solutions after seeing a woman die on their jet ski after she had initially shown signs of consciousness after being rescued from a rough sea. He believes a few seconds’ difference could have saved her life. After that incident, Plazas went on to work as an engineer at a Pilkington factory in Sagunto, while Fernández started working in drone manufacturing. They both eventually reunited to found General Drones.

The pair started by building a drone that could withstand the wet, windy conditions it would experience during rescues. The design process for the drone was started in the garage of Plazas’ grandmother’s house. Now, after winning an innovation award in Valencia, General Drones provides its services to 20 beaches throughout the region of Valencia, Spain.