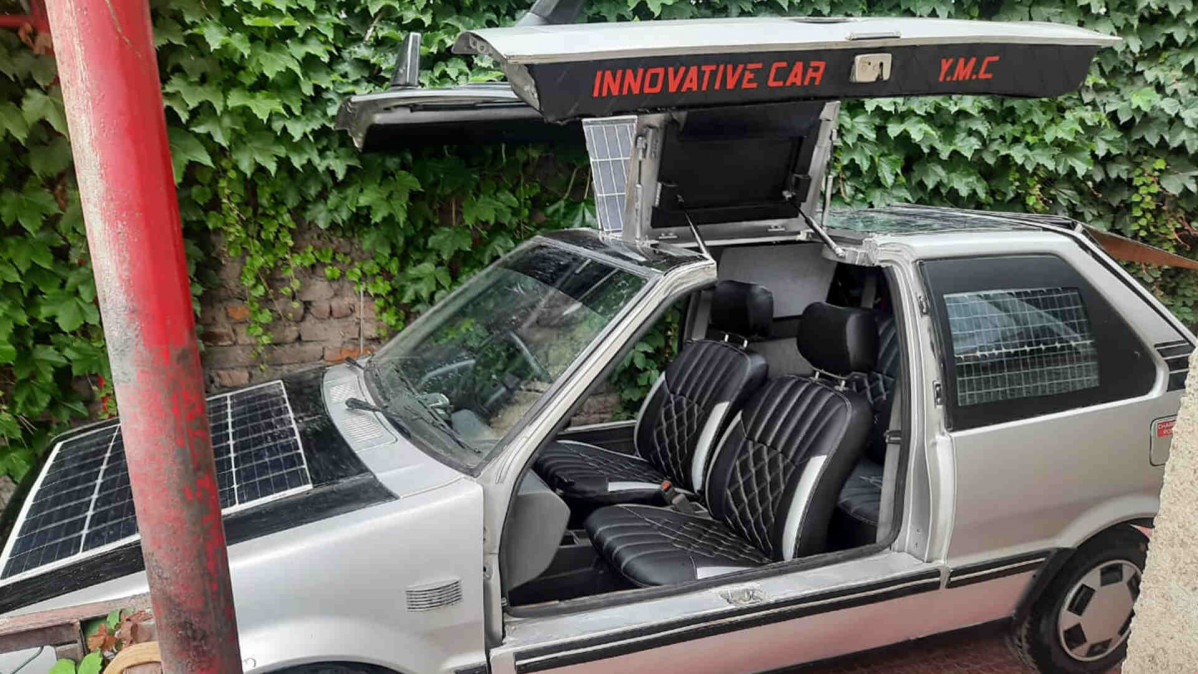 In 2009, Bilal Ahmed from Kashmir, India, came across a news article that predicted the exponential rise of gasoline prices in the future. That was his starting point. Today, Ahmed, a mathematics teacher, is the creator of his dream car – what may be the first-ever electric car in his state to be run by solar power.

“I’m an innovator, not a car maker,” he tells IE in an interview. Ahmed converted his 1998 model Nissan Micra into an EV, with solar panels as a supplementary charging method, over a course of 11 years. The car also featured after-market gull-wing doors to aid in the placement of the panels.

Ahmed’s solar-powered car was applauded by netizens, calling him the ‘Elon Musk of India’.

“The innovative car [what he calls his modified vehicle] comprises of six monocrystalline solar panels – on the bonnet, tailgate, gull-wing doors, and the roof,” he says.

“The car derives 40 percent of its power from the solar panels. I’d also experimented with minimum battery capacity and motor size, and found that a 50 mAh battery could efficiently power a 10-20kW motor, giving me a decent range,” says Ahmed.

Ahmed said that he used monocrystalline solar panels, which are known to generate maximum energy even with less solar energy, for his vehicle. He explained that these are more efficient and occupy a low surface area.

Though Ahmed always liked cars, he didn’t pursue his interest earnestly until he was in the equivalent of his senior year at university. Mathematics, however, remained dear to him all his life. Ahmed firmly believes that his deep-rooted passion for the subject and for civil engineering paved the way to take on the massive project himself.

“Back when I wanted to work on my design [11 years ago], it wasn’t that easy in Srinagar [the capital of Jammu and Kashmir, the northernmost state in India, which is also rather remote]. The experts related to the field that I spoke to weren’t able to comprehend my concept. And due to the underdeveloped car industry, I could only incorporate 60 to 70 percent of my design into my concept,” he tells us.

The most important thing, though, is that I had an idea and I executed it. Which, I hope, inspires people, he says.

Rising gasoline prices weren’t the only motivation for Ahmed’s project. “Luxurious cars like Mercedes, BMW, or even the DeLorean and Tesla, will remain a dream for common people. I wanted to build an affordable yet fancy EV for middle-class families in India,” he says.

The innovative car cost Bilal Rs 15 lakh (Around USD 19,000) to build. “I had to procure most of the material online. Jammu and Kashmir don’t have a large market for such goods in comparison to Delhi or other Indian states,” he says. Ahmed had sourced the high-efficiency solar panels from Chennai, in the state of Tamil Nadu. Since Kashmir has a comparatively cool and cloudy climate, with lower sunlight than some other Indian states, high-efficiency solar panels were essential.

To overcome the problem of low sunlight, he decided to install gull-wing doors, which open upwards, allowing him to align the panels on the doors to receive sunlight more directly. Making and balancing the doors, however, was a humungous task.

Concurrently, the braking system will also “regenerate the power to its batteries to conserve energy. My car is eco-friendly and works on free energy resources”.

The innovative car uses a lead-acid battery. Ahmed mentions that a lithium-ion battery can also be used, but a cell protection circuit would be required.

“The biggest challenge was keeping the weight in check. Though a Nissan Micra is heavy, I chose [that vehicle] as I wanted an attractive car. But solar-powered cars need to be light to be efficient. Another hindrance was the automatic gearbox of the car. In a manual car, it is rather easy to change the gear ratios. The challenges of adapting an automatic car to an EV drivetrain were higher when compared to a manual variant,” he explains.

How road-legal is the innovative car?

For his efforts, the innovator is now associated with the IIED Centre of the National Institute of Technology, Srinagar, a prestigious engineering institute in the country. The center intends to help Ahmed develop his innovation and will connect him with the industries that can guide him accordingly.

He also intends to build another solar car that will be, “better than the Lightyear”.

“I believe solar-powered cars are the future, primarily because it’s a free source of energy. Especially in countries like India, where sunlight is in abundance. Petrol prices around the world are also a factor – it is increasing at a steady pace. So, the switch to solar and EV, which is eco-friendly, is inevitable,” he adds.

Given the right platform and resources, Ahmed is certain he could become the Elon Musk of India.