For decades, open systems architectures and open standards have helped accelerate innovation to end users in aerospace and defense applications through the development of interfaces that are open, key, and well-defined. Today, space system designers and developers are truly embracing the SpaceVPX (VITA 78) standard, which leverages the OpenVPX (VITA 65.0) architecture through its slot profile and module profile level building blocks, which create interconnect solutions based on the user’s need.

Explore the basics of SpaceVPX with the designers of the VPX and SpaceVPX interconnect. Learn about the standard’s origin, the advantages of SpaceVPX vs. OpenVPX, recent changes to the standard and the importance of standard interconnects which drive down cost, results in a more robust supply chain, and maintains a path for future expansion.

SpaceVPX is a standard for creating plug-in cards (PICs) from its slot profile and module (protocol) profiles. In turn, these building blocks create interconnected subsystems and systems. Developed under the auspices of The Next Generation Space Interconnect Standard (NGSIS), it is the result of a government-Industry collaboration. The primary goal of SpaceVPX is to cost-effectively remove bandwidth as a constraint for future space systems.

SpaceVPX is based on the VITA (VMEbus International Trade Association) OpenVPX standard with enhancements that extend the standard for space applications.

The NGSIS team selected the OpenVPX standard family as the physical baseline for the new SpaceVPX standard because VPX supports both 3U and 6U form factors with ruggedized and conduction-cooled features suitable for use in extreme environments. The infrastructure of OpenVPX also allows for prototyping and testing SpaceVPX on the ground.

SpaceVPX is built upon several standards, some of which are part of the American National Standards Institute (ANSI)/VITA and European Cooperation for Space Standardization (ECSS) OpenVPX family:

OpenVPX is a defined set of system implementations within VPX that specifies a set of system architectures. OpenVPX organizes connections in four major interconnect planes — data, control, utility, and expansion.

Control Plane
The control plane, also a fabric connection, typically has less capacity and is used for configuration, setup, diagnostics, and other operational control functions within the payload and for lower-speed data transfers.

Expansion Plane
The expansion plane may be used as a separate connection between modules using similar interfaces or to bridge heritage interfaces in a more limited topology such as a bus or ring.

Pins not defined as part of any of these planes are typically user-defined and are available for pass-through from daughter or mezzanine cards, or to rear transition modules (RTM). For maximum module reuse, the user-defined pins should be configurable so as not to interfere with modules that use the same pins in a different way. Consult ANSI/VITA 65.0 for more detail.

An evaluation of OpenVPX for space usage revealed several shortcomings. The key limitation was the lack of features available to support a full, single-fault-tolerant, highly reliable configuration. Utility signals were bused and, in most cases, supported only one set of signals via signal pins to a module. As a result, a pure OpenVPX system has opportunities for multiple failures. Additionally, a full management-control mechanism was not fully defined with VITA 46.11.

From a protocol perspective, SpaceWire is the dominant medium-speed data and control plane interface for most spacecraft, yet the typical OpenVPX control planes are peripheral component interconnect express (PCIe) or Ethernet which are not generally used in space applications.  (Note: Gigabit Ethernet was added to the 2022 revision of the SpaceVPX standard.)

The goal of SpaceVPX is to achieve an acceptable level of fault tolerance, while maintaining a reasonable level of compatibility with existing OpenVPX components including connector-pin assignments for the board and the backplane (Figure 1.).

For the purposes of fault tolerance, a module (defined as a printed wire assembly which conforms to defined mechanical and electrical specifications) is considered the minimum redundancy element, or the minimum fault containment region. The utility plane and control plane within SpaceVPX are all distributed redundantly and are arranged in star topologies, dual-star topologies, partial-mesh topologies or full-mesh topologies to provide fault tolerance to the entire system.

To meet the desired level of fault tolerance, the utility plane signals must be dual-redundant and switched to each SpaceVPX card function.

A trade study, conducted in 2010 through a government and industry collaboration with the support of the SpaceVPX Working Group, compared various implementations including adding the switching to each card in various ways and creating a unique switching card. The latter approach was selected so SpaceVPX cards can each receive the same utility plane signals that an OpenVPX card receives with minor adjustments for any changes in topology. This became known as the Space Utility Management module (SpaceUM), a major foundation of the SpaceVPX standard.

A 6U SpaceUM module contains up to eight sets of power and signal switches to support eight SpaceVPX payload modules — the 3U version of the SpaceUM can support up to five. It receives one power bus from each of two power supplies and one set of utility plane signals from each of two system controller functions required in the SpaceVPX backplane. The various parts of the SpaceUM module do not require their own redundancy. They are considered extensions of the power supply, system controller and other SpaceVPX modules for reliability calculation.

Each slot, module and backplane profile in OpenVPX is fully defined and interlinked. Adapting these profiles for use in space requires specification of a SpaceVPX version of each profile.

Slot Profile A slot profile provides a physical mapping of data ports onto a slot’s backplane connector, which is agnostic to the type of protocol used to convey data from the slot to the backplane.

Interconnects are one more critical part of SpaceVPX. As with other elements of the standard, they are based on interconnects developed for OpenVPX, but designed for the extreme space environment.

Problematic temperatures, vibration, outgassing and other factors can catastrophically compromise interconnect systems as well as signal and power integrity. For decades, designers for space applications have relied on customized interconnect designs to ensure the reliability of embedded electronics exposed to the extremes of space. The high cost and long lead times of a custom interconnect solution were once considered a worthwhile investment against failures that are extremely costly or impossible to fix in space.

Today, the use of standard interconnects drives down cost, improves availability and maintains a path for future expansion.

By leveraging the OpenVPX architecture, SpaceVPX brings in the interconnect solutions which are defined in VITA standards and have gone through extensive testing to support their use in space.

The VITA 46 VPX connector is the original VPX interconnect. It is based on TE Connectivity’s (TE) MULTIGIG RT 2 connector which was released in the VITA 46 standard in 2006. 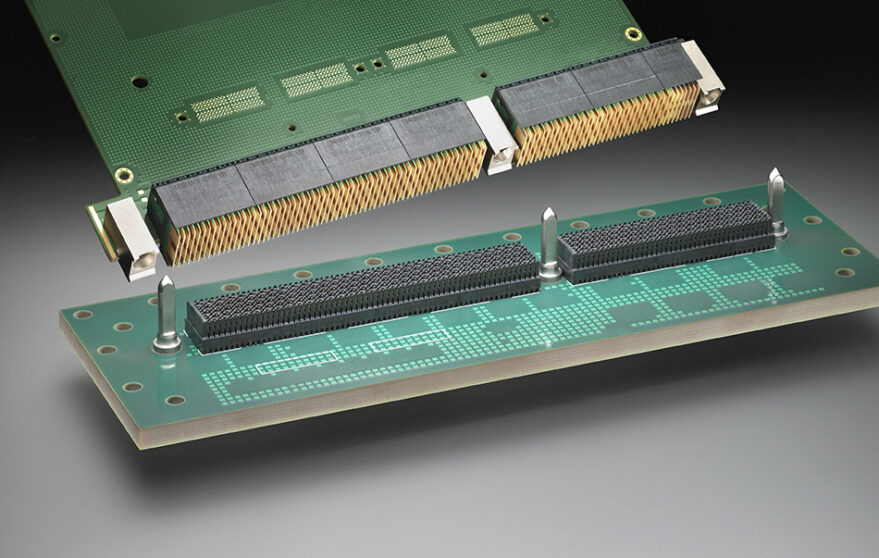 MULTIGIG RT connectors have gone through extensive testing by TE to establish suitability for space, including:

Most space system designers use MULTIGIG RT connectors to meet their requirements with no physical change to the design or materials and finishes. If minimal changes are required (e.g., higher lead content [40%] in the contact tails is specified for increased tin-whisker mitigation), additional screening tests are required based on the user or program requirements, but the connector-manufacturing processes are relatively the same which helps improve cost and availability.

VITA 67 is the base standard for RF modules. VITA 67.3 is used for SpaceVPX architecture with apertures defined within specific slot profiles for RF and optical connector modules.  VITA 67.3 offers coaxial contact solutions with the initial sub-miniature push-on micro (SMPM) contacts as well as higher-density coaxial interfaces NanoRF and switched-mode power supply (SMPS), which can increase the contact density two to three times over SMPM. A new revision to VITA 67.3 has begun to add 75 Ohm coaxial interfaces to support higher speed video.

VITA 66 is the base standard for optical modules, with MT ferrules as the primary optical interface between the plug-in module and backplane. The apertures in SpaceVPX slot profiles accommodate optical and hybrid RF/optical connector modules meeting the requirements of VITA 66.5. MT interfaces can be specified for 12 or 24 fibers for highest density. 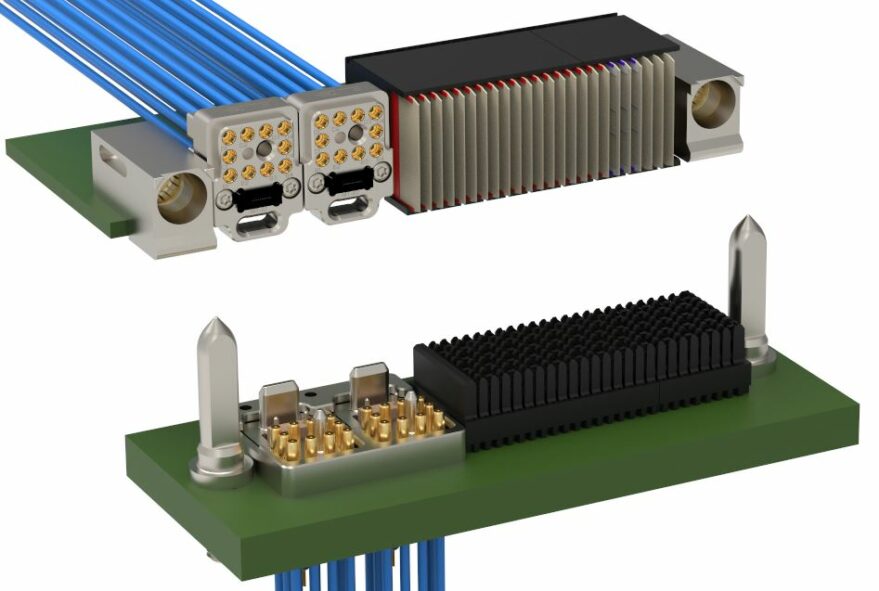 XMC mezzanine cards can be implemented on SpaceVPX plug-in modules to add I/O and other features. VITA 61 XMC 2.0, the standard based on TE’s Mezalok connector, is the recommended XMC connector in the SpaceVPX standard. The Mezalok connector features multiple points of contact per pin, supporting the redundancy required for space applications. The connector meets outgassing requirements and has been tested to extreme environments — including 2000 thermal cycles from -55 ºC to +125 ºC with no solder joint failures.

Higher data rate MULTIGIG RT 3 connectors are available and standardized in VITA 46.30 (compliant pin) and 46.31 (solder tail) to support channels to 25-32 Gigabits per second, supporting 100G Ethernet and PCI Gen 4 and 5. These can be incorporated in a SpaceVPX slot replacing VITA 46.0 connectors.

The latest revision of the VITA 67.3 standard includes higher-density RF interfaces NanoRF and SMPS, reducing size and weight — both of which are critical for space systems — and accommodating higher frequencies to 70 GHz. A new revision to VITA 67.3 has begun to add 75 Ohm coaxial interfaces within a connector module to support higher speed video protocols.

The VITA 66.5 standard will be released in 2022, documenting higher-density optical interfaces, bringing up to three MT interfaces into a half-module and enabling integration of a fixed edge-mount transceiver. In addition, VITA 66.5 provides solutions with NanoRF contacts and optical MTs integrated into a common connector module, providing unprecedented density within an OpenVPX slot.

Patrick Collier is Open Systems Architect and lead systems engineer at Aspen Consulting Group. He focuses on the development and use of open architectures for both space and nonspace applications. Prior to this, Patrick was an Open Systems Architect and Systems Engineer at L3Harris. Previously he was a lead hardware engineer at PMA-209 NAVAIR, where he focused on the development of the Hardware Open Systems Technology (HOST) set of standards. His first assignment was as a senior electrical research engineer with the Air Force Research Laboratory Space Vehicles Directorate. While at AFRL, he founded the Next Generation Space Interconnect Standard (NGSIS) with Raphael Some (NASA JPL). Patrick also founded and is currently chair for the VITA 78 (SpaceVPX) and VITA 78.1 (SpaceVPXLite) efforts. He is also a cofounder of the Sensor Open System Architecture (SOSA) and chair of its Hardware Working Group. Additionally, he was a lead for the Space Universal Modular Architecture (SUMO), where he worked to incorporate existing space-related standards and architectures into SUMO.

Michael Walmsley, global product manager for TE Connectivity, has more than 40 years of experience with interconnects, primarily in engineering and product manage­ment roles. His areas of expertise include interconnect solutions for embedding computing, rugged high-speed board-level, and RF connectors. Michael is a board member for the VITA Standards Organization (www.vita.org), which drives technology and standards for the bus and board industry. He is also actively involved in both VITA and Sensor Open System Architecture (SOSA). Michael holds a bachelor’s degree in mechanical engineering from the University of Rochester and an MBA from Penn State.