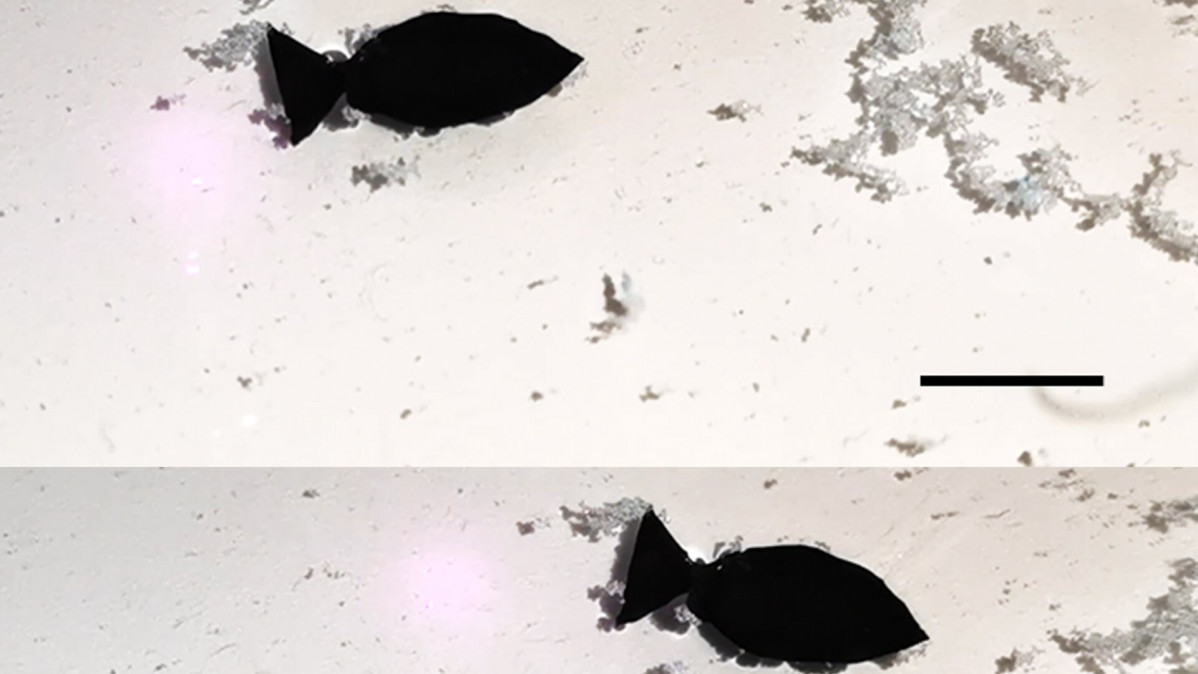 Last week, it was revealed that microplastics were found for the first time in fresh Antarctic snow. They were discovered high in the Alps, bottled water, and human blood.

They can be harmful to animals if ingested. But the growing menace is difficult to remove — considering their size — especially once they settle into nooks and crannies at the bottom of waterways.

Researchers in the American Chemical Society’s Nano Letters have devised a solution – a light-activated fish robot that “swims” around quickly, picking up and removing microplastics from the environment. Their work was published on June 22.

Strong and flexible characteristics were prerequisites

Microplastics have been challenging to remove from aquatic environments as they can fall into cracks and crevices. Former solutions that have been proposed include using flexible and self-propelled robots to reach these pollutants and clean them up. But the traditional material used for soft robots is hydrogels and elastomers, which can be damaged easily in aquatic environments.

“The cyclodextrin molecules and sulfonic acid groups on sulfonated graphene nanosheets have strong Π-Π interactions, host-guest recognition, and electrostatic interactions with organic dyes, antibiotics, heavy metals, etc. on microplastics. So we decided to use these two materials to make flexible robots,” says Zhang.

Another strong and flexible material called mother-of-pearl, also known as nacre, can be found on the inside surface of clam shells. Nacre layers have a microscopic gradient, going from one side with many calcium carbonate mineral-polymer composites to the other with mostly a silk protein filler.

“Inspired by nacre, we have developed a durable soft robot with the integration of versatile locomotion and function of microplastics treatment. We embedded high content of β-cyclodextrin (β-CD) modified sulfonated graphene (SG) in polyurethane (PU) matrix to mimic the organo-inorganic gradient structure of nacre,” says Zhang.

According to their research, nacre has different maximum loadings for different types of microplastic composite pollution. “They can stay on the water until they reach their maximum load,” Zhang adds.

How does this fish swim?

Composite nanosheets were created when the researchers linked β-cyclodextrin molecules to sulfonated graphene. The solutions of the nanosheets were then incorporated with different concentrations into polyurethane latex mixtures.

The researchers then developed a layer-by-layer assembly method, creating an ordered concentration gradient of the nanocomposites through the material. From this, the team formed a tiny fish robot that was 15 mm (about half-an-inch) long. Rapidly turning a near-infrared light laser on and off at a fish’s tail caused it to flap, propelling the robot forward.

The robot could move 2.67 body lengths per second — faster than other soft swimming robots and at the same speed as active phytoplankton moving in the water.

The researchers showed that the swimming fish robot could repeatedly adsorb nearby polystyrene microplastics and transport them elsewhere. Also, the material could heal itself after being cut, still maintaining its ability to adsorb microplastics.

The durability and speed of the fish robot made the researchers place all their bets on it, stating that it could be used for monitoring microplastics and other pollutants in harsh aquatic environments.

Developing such a robot comes with its own set of challenges.

“The embedded electronic components will undoubtedly add weight to the robots, which hinders the development of lightweight micro-robots. Taking into account operating conditions and economic costs, integration, lightweight and intelligence are the development direction of soft robots, conventional mechanical drive and functional systems such as actuation motors and manipulators are too large or too heavy,” explains Zhang.

Balancing the functional and mechanical properties of materials can become intimidating.

To counter such issues in their work, the researchers “innovatively” introduced interfacial hydrogen bonding between functional fillers and polymer soft matrix via gradient assembly process. “The breaking and reorganization of dynamic hydrogen bonds permit the integration and ductility at the molecular scale and enhance stretchability,” says Zhang.

Will take time to be oh-fish-ial

However, we aren’t that close to the reality of a robot fish picking up microplastics.

“The soft robot in this work, currently, only integrates the function of the directional collection of microplastics on the water surface. And its size, input light… all need to be optimized and improved before large-scale application,” adds Zhang.