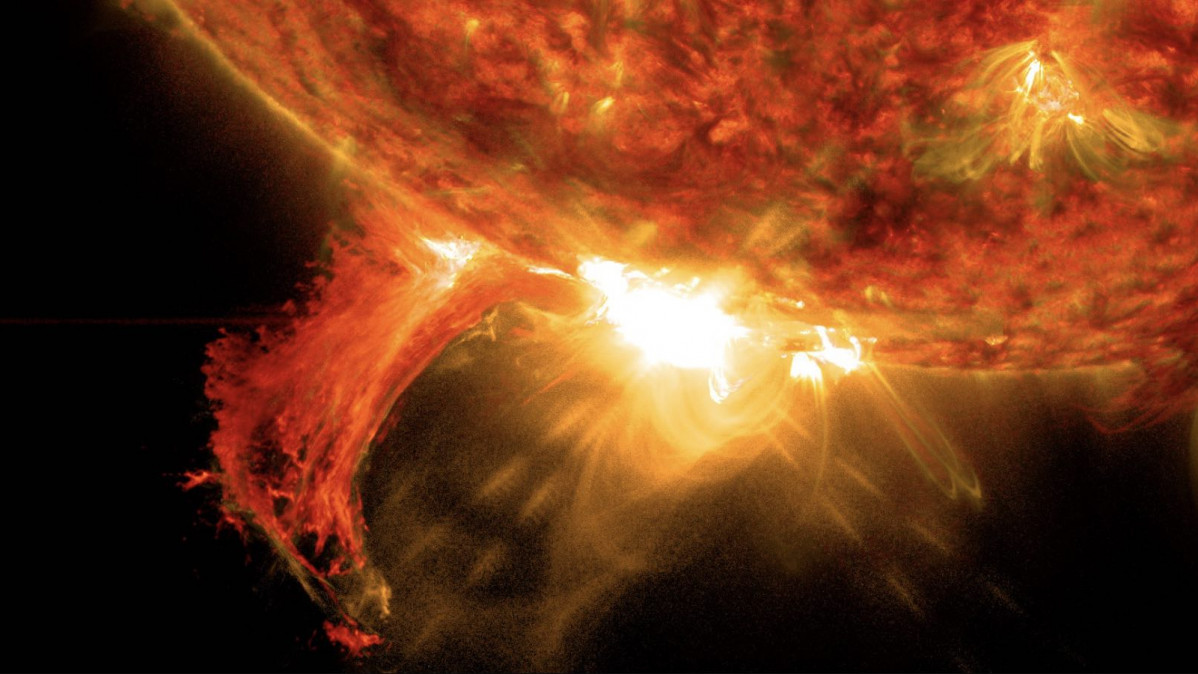 The Sun isn’t a ball of fire. It’s a gigantic, electrically charged nuclear reactor surrounded by a capricious halo of plasma that occasionally belches a jet of radiation out into space. In 1859, a large jet of radiation — called a solar flare — struck Earth head-on. There weren’t many electronics back then, but the large solar flare wreaked havoc on the world’s nascent telegraph network, sending showers of sparks from telegraph machines, shocking operators, and even sparking fires.

Now, more than 160 years later, our modern world is completely dependent on many complex networks of electronics — including vulnerable satellites — that could be knocked offline by another direct hit.

Surprisingly, researchers didn’t quite understand the physics of solar flares until relatively recently. Thanks to new research published Wednesday in the peer-reviewed journal Nature, the violent phenomenon is coming into an even clearer view. Interesting Engineering sat down with Physicist Gregory D. Fleishman, a co-author of the new paper, to talk about the Sun, solar flares, and what his team discovered.

Interesting Engineering: When we talk about the Sun, we often focus on the process of nuclear fission that generates its energy, but solar flares happen in the outer layers. How do these outer layers of the Sun allow solar flares to happen?

Gregory D. Fleishman: We see the photosphere — the surface of the Sun — which is bright and hot and [whose emissions] support life and everything around us. What is special about the Sun and other stars is they are magnetic objects. The magnetic field makes a lot of difference between our usual experience on Earth and what happens there in the Sun and, in particular, the magnetic field above the photosphere. That’s the solar atmosphere, called the corona, which you can see during solar eclipses.

IE: What is the corona and what physical processes happen there?

Fleishman: You can see the corona in white light during an eclipse. It’s very complicated, dynamic, and unusual from our everyday perspective. The magnetic field is strongly linked with plasma — ionized gas — and because of various forms of motion, this plasma and the magnetic field become more and more tangled. A lot of free energy is accumulated in this magnetic field.

After reaching a certain threshold or instability condition when it cannot live longer in a steady-state, some explosions happen. These explosions are basically conversions of this free magnetic energy — which is the dominant form of energy in the solar corona — to other forms of energy.

IE: What other forms of energy are you talking about?

Fleishman: There’s kinetic energy — regular motion — like coronal mass ejections, jets, and other phenomena. Another form of energy is the usual heat energy. Increased temperatures more or less increase the propulsion energies of all particles.

There is another form of energy where particles are not heated, but are accelerated to much much higher energies. This typically does not happen around us, other than in special accelerators.

IE: Before we get any deeper into this, can you explain what free magnetic energy is?

Fleishman: Think of a normal magnet. It produces some magnetic field around it, outside of itself. This magnetic field is linked with the magnet itself. So, you cannot take this energy and convert it to something else.

So, free energy is basically the energy that can be converted from magnetic energy to other forms of energy. You cannot release all magnetic energy because the steady-state component of the magnetic field stays there. It will not be released, it will be converted. But the energy that is on top of this steady-state can be released if some conditions are met.

IE: How is the free magnetic energy turned into nonthermal particle acceleration?

Fleishman: That’s the fundamental question: how does this phenomenon happen in the solar flare?  The standard solar model — formulated something like 50 years ago, with some more recent developments — postulated that the key region where this could happen was the so-called x point, where magnetic fields intersect.

It’s a lot easier to release this energy here because the decay rate of the magnetic field can be enhanced where [the fields] intersect. The fundamental phenomenon that was proposed is called magnetic reconnection. Basically, the idea behind that is if you have field lines that are oppositely directed and you bring them into close contact, they can annihilate and release energy.

IE: But your observations clash with this view, right? What’s wrong with the standard model you just described?

Fleishman: The problem with this standard model is that the volume around this x point —  sometimes you can think of it as a sheet or layer where similar processes happen — is much smaller than needed to explain the number of particles that are involved. The number of electrons, for example, is huge: 1035 particles.

IE: How did you go about solving this problem?

A revolutionary observational technology was recently developed to answer these fundamental questions: the Extended Owens Valley Solar Array. It is a microwave instrument that consists of many antennas that allow us to simultaneously make measurements in many frequencies in the microwave range with high spatial resolution. As a result, we can resolve small locations in the solar corona microwave spectra from each such location. From each pixel, as we call them.

IE: What are you looking at exactly with this high-resolution instrument?

IE: What do these maps tell you about the inner workings of solar flares?

Fleishman: What we discovered with those maps is, first of all, that the magnetic field decays very strongly in a certain region between the solar photosphere and the x point. There is a special region between them where the magnetic field quickly decays and where this magnetic energy is released. This was the subject of our earlier paper published in Science magazine in 2020.

From the same data set, now, we analyzed what happens with thermal and non-thermal particles. What we found was that in that area where the magnetic field decays, there is no thermal plasma at all. There’s a gap or hole in thermal plasma distribution. This region — this hole — is filled by high-energy non-thermal electrons, which are presumably accelerated from the thermal pool due to the release of magnetic energy. It happens in the same location, with the same area and volume.

IE: Now that you’ve had time to thoroughly analyze the data from the instrument, what can you tell us about solar flares?

Fleishman: We found these key pieces of the puzzle: We determined where this energy release conversion happens. We determined the decay of magnetic fields, which means the release of magnetic energy. We detected a huge number of non-thermal accelerated electrons in the same region, the same area. And we detected a lack of thermal plasma, which means that these non-thermal particles are taken from the thermal pool and accelerated to high energy. So, we have a complete picture of what is going on in the heart of a solar flare.