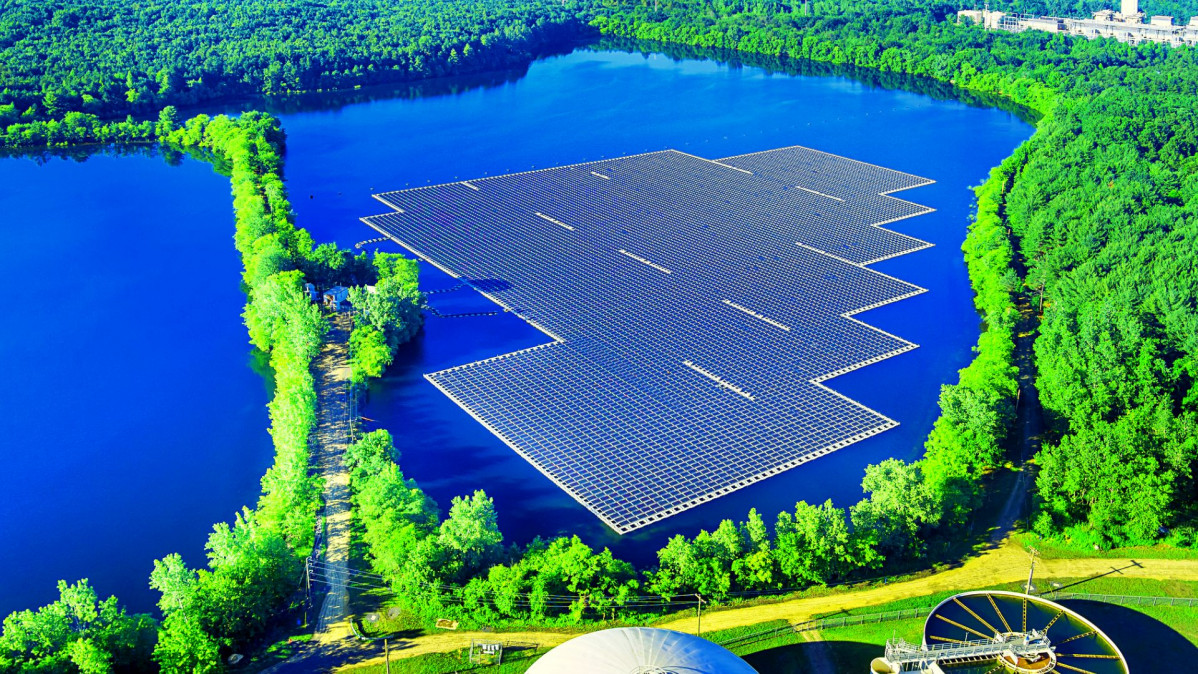 Solar power is evolving to suit the needs of our increasingly climactic times.

Two tugboats hauled an enormous array of 12,000 solar panels to its mooring on Portugal’s Alqueva reservoir in early May, according to a recent Reuters report. That’s the equivalent of four soccer fields, and when it officially kicks into operation in July, it will be Europe’s largest floating solar farm.

This is a seriously large engineering endeavor, but it and many others globally raise the question: how can floating solar panels help us fight climate change?

Located on the Alqueva reservoir, which is used to generate hydropower, the solar park will generate 7.5 gigawatt/hours (GWh) of electricity per year, and will be supplemented with lithium batteries capable of storing 2 GWh, ultimately producing enough energy to power more than 30 percent of the electricity needs of families in two nearby towns.

The shimmering floating island, built on Western Europe’s largest artificial lake, is part of Portugal’s ambition to reduce reliance on imported fossil fuels and expedite its transition to renewables. And the country is not alone in its move to solar and other alternative energy sources, with prices rising rapidly and the entire world stepping up its efforts to decarbonize power at a time when curbing global warming is “now or never”.

Recent research suggests that installing floating solar photovoltaic systems on 10 percent of the world’s hydroelectric reservoirs could result in around 3.0 TW to 7.6 TW (4,251 TWh to 10,616 TWh) of annual generation.

However, powering with solar can be tricky, since solar farms can be land-intensive. Consider Japan, for example, which is slightly smaller than the state of California. Even though the Japanese government is rushing to increase solar power generation to cut its greenhouse gas emissions, there is limited room to build new large-scale solar plants. Things will become even more difficult in the future because of severe competition for land that’s also required for food production and biodiversity conservation.

Fortunately, solar doesn’t have to be limited to land, as demonstrated by Portugal’s example. This is the idea behind floating photovoltaics, also known as floating solar or “floatovoltaics,” which are photovoltaic modules installed on buoyant platforms that float on bodies of water with calm surface conditions.

Water-based solar power can be up to 15% more efficient

Solar arrays have become a common sight in deserts and on rooftops since the first solar power plant was established in the 1960s. However, in the last decade, a new breed of solar farms has emerged which places them atop big bodies of water.

Advocates argue that placing solar arrays on reservoirs could provide many benefits. The arrays are simply conventional solar panels mounted on floats and secured with mooring lines. And floating solar farms offer a lot of advantages: First of all, they don’t take up space on land, and no land needs to be flattened for their construction. Moreover, they can be around 15 percent more efficient because the water keeps them cool. They also help prevent evaporation, conserving more water for electricity, especially when built near hydroelectric dams.

Moreover, floating solar panels free up land that can be used for a variety of additional environmental, residential, or commercial reasons, while retaining water for hydropower, drinking, and irrigation.

To take it a step further, floating solar panels could be combined with pumped-storage hydropower to address the dual issues of producing electricity when sunlight is scarce and storing it as potential energy in reservoirs when solar-power generation is high.

And they may also reduce the carbon intensity, which is emissions per unit of energy produced, of hydropower operations, according to a Nature report. While many hydropower plants are as low-carbon as other renewables, the report states that the greenhouse gas methane is released from decaying submerged plant materials that they can emit the same amount of carbon per unit energy as fossil-fuel power plants. For some of these sites, installing solar panels on just 2 percent of the reservoir’s surface area could quadruple energy production, halving carbon intensity.

There is also evidence suggesting that floating solar panels could help reduce global warming. Depending on the design of the panels, reducing the amount of sunlight that reaches the water can have a large cooling effect.

What are the cons to floating solar power arrays?

However, there are also some cons in the floating solar space. For example, estimates suggest that floating solar farms are roughly 10 to 15 percent more expensive than land-based panels, due to the added cost of manufacturing the floats. Although, costs for operation and maintenance are similar.

Technical difficulties may raise development expenses, too, as bird feces and microbial growth have the potential to impair solar performance. Frequent cleaning may be required, necessitating easy and secure access to the panels.

Moreover, not just anyone can use this technology. While large-scale floating solar installations can be found all around the world, they are mainly used to provide electricity to sprawling cities, businesses, or utilities.

And there is also a question we must ask ourselves: Would donning the world’s precious freshwater reserves with floating solar farms to decarbonize energy put pressure on already fragile ecosystems?

After all, the rapid adoption of any new technology can have unanticipated effects — consider wind turbines, for example. Their harm to birds and bats has been well-documented. Moreover, it doesn’t end there, since installing offshore wind turbines can cause noise pollution, disrupt whale migration, and cause problems for commercial fishing.

It should also be noted that, as of this writing, the relationship between the development of floatovoltaics and objectives in terms of the environment, society, and economy has largely remained unexplored.

Today, most of the research efforts focus more on the feasibility of the engineering of floatovoltaics than the ecology it’s designed to purportedly improve, which could be a deterring factor in the future. If we don’t build a more comprehensive view of the effects of floatovoltaics, the technology could receive lukewarm reception from the public at best. And that could delay the environmental-impact approval process, and even deter private investment. Potentially, it could also stymie the decarbonization transition.

Another concern is that the panels are supported by hundreds of floating modules made of virgin plastic. This could be mitigated by placing the panels on top of thousands of recycled plastic and cork floaters. Amorim, a cork-processing company that has employed cork composites as a thermal isolator for NASA space shuttles, invented the composite material. It has decreased the carbon footprints of farms by 30 percent at Alqueva.

Since floatovoltaics are a promising concept, their installations and investments are on the rise. But many unsolved uncertainties remain when it comes to the technology’s environmental impacts, in addition to its social, technical, and economic ramifications. Knowledge gaps must be filled in order for there to be a healthy implementation without overpromising on benefits or having the roll-out delayed by unforeseen roadblocks.

Given that the United States has just begun construction of the country’s biggest floating solar farm in New Jersey, a better understanding of the implications of floating solar panels and a more sustainable alternative to virgin plastic floaters couldn’t come any sooner. Time will tell how these inspired and increasingly popular alternatives to conventional solar power fare, in the long run.