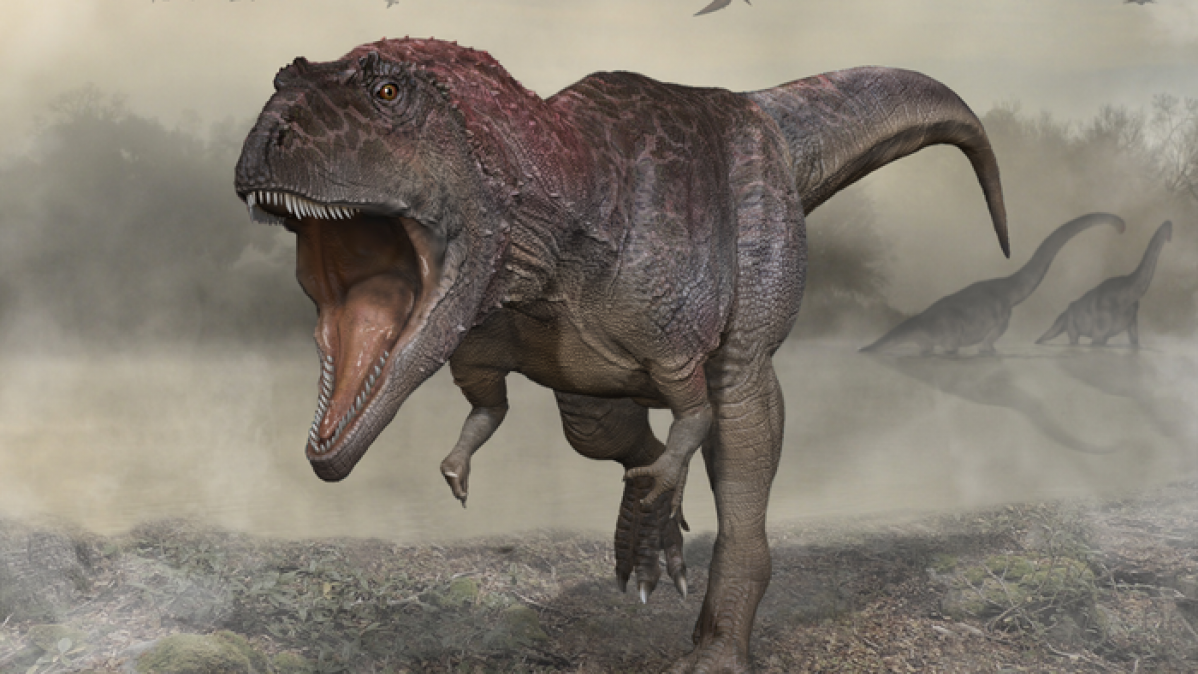 Interestingly, the two dinosaurs didn’t live at the same time. M. gigas went extinct roughly 30 million years before T. Rex appeared on the scene. For reference, the asteroid that killed off the non-avian dinosaurs struck Earth 66 million years ago.

“The fossil of M. gigas shows never seen before, complete regions of the skeleton, like the arms and legs that helped us to understand some evolutionary trends and the anatomy of Carcharodontosaurids — the group that M. gigas belongs to,” says paleontologist Juan Canale. The find is described in an article published Thursday in the peer-reviewed journal Current Biology.

What gives with the tiny arms?

Paleontologists are pretty sure that M. gigas and T. rex evolved their striking body shapes independently. Canale says he’s “convinced that those proportionally tiny arms had some sort of function. The skeleton shows large muscle insertions and fully developed pectoral girdles, so the arm had strong muscles,” says Canale. That suggests the arms didn’t reduce in size because they weren’t needed.

M. gigas used the tiny arms to hunt because “actions related to predation were most likely performed by the head,” he says. Instead, might have come in handy during reproduction or to offset mobility challenges associated with the creature’s huge head, body, and bipedal mode of transportation. “They may have used the arms for reproductive behavior such as holding the female during mating or support themselves to stand back up after a break or a fall,” according to the researcher.

The tiny arms aren’t M. gigas’ only notable feature. The skull Canale and his team dug out of the Earth was highly ornamented with grooves, nodules, and tiny horns. The researchers don’t think those features served a practical purpose. Instead, Canale says the males probably used their flashy noggins to attract females’ attention. “Sexual selection is a powerful evolutionary force. But given that we cannot directly observe their behavior, it is impossible to be certain about this,” he says.

The new fossil is a major addition to the fossil record

The specimens Canale and his team found were roughly 45 years old when it died. It was 36 feet (11 m) long and probably weighed more than four tons. That’s roughly what two rhinoceroses weigh. The dinosaur appears to have lived during the time when carcharodontosauruses were thriving — but that wouldn’t last for long. “The group flourished and reached a peak of diversity shortly before became extinct,” Canale says.

The researchers discovered the specimen described in the paper on their first day in the field in 2012. “It was probably one of the most exciting points of my career,” Canale says. The team used jackhammers, saws, picks, and chisels to remove tons of rock and earth that were covering the fossils. When that material was out of the way, they turned to much more delicate tools to finish the job. The excavation took place over the course of four seasons of fieldwork between 2012 and 2014.