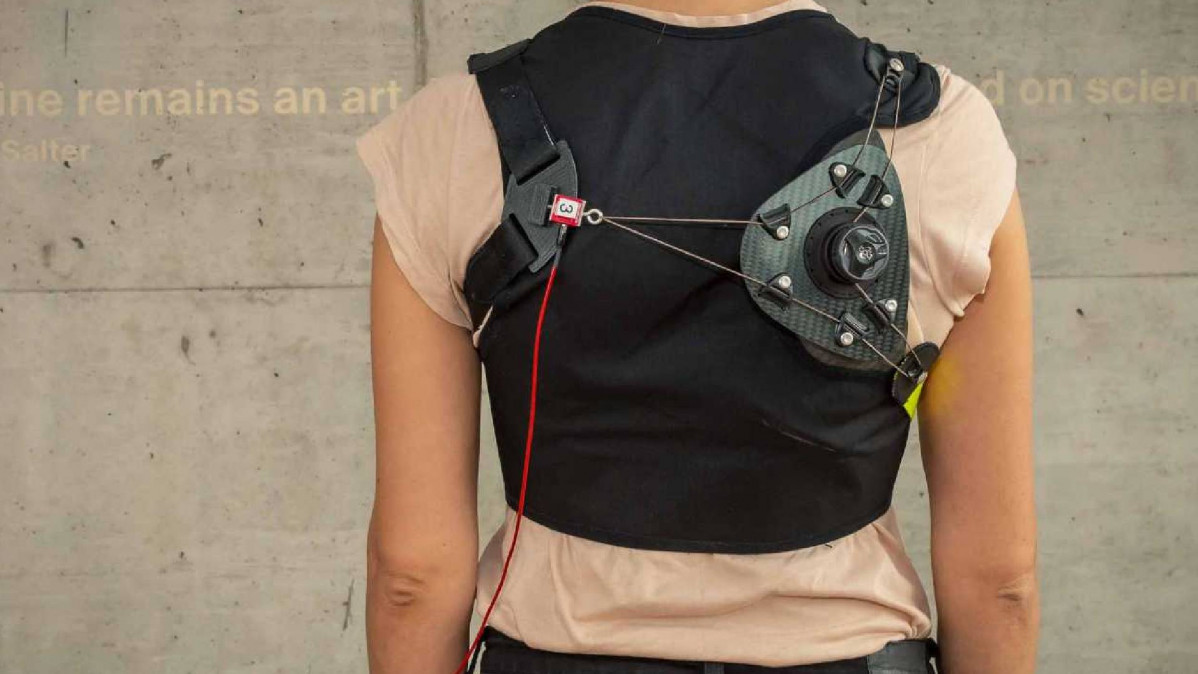 What if a wearable could offer more strength and stability to the disabled? Researchers at ETH Zurich have engineered a wearable textile vest that functions as an extra layer of muscles for those who need it most, according to a press release by the institution published this Thursday.

“Although hospitals have numerous good therapy devices, they are often very expensive and unwieldy. And there are few technical aids that patients can use directly in their everyday lives and draw on for assistance in performing exercises at home. We want to close this gap,” said Marie Georgarakis, a former doctoral student at ETH Zurich’s Sensory Motor Systems Lab.

The new wearable is called the Myoshirt and is described as follows: “It is a kind of vest with cuffs for the upper arms accompanied by a small box containing all the technology that is not used directly on the body. Working via sensors embedded in the fabric, a smart algorithm detects the wearer’s intentional movements and the amount of force required. A motor then shortens a cable in the fabric running parallel to the wearer’s muscles – a sort of artificial tendon – and in this way supports the desired movement.”

The device is further said to offer support that is always in tune with the user’s movements and can be tailored to their individual preferences. When sporting the vest, the user maintains control at all times and can override the device at any time if needed.

The researchers undertook a study of the new device with 12 subjects: ten people without any physical impairments, one person with muscular dystrophy, and one person with a spinal cord injury. They found that all participants were able to lift their arms and/or objects for much longer with the use of the vest.

The data also showed that endurance increased by about a third in the healthy subjects and by roughly 60% in the participant with muscular dystrophy. Meanwhile, the participant with a spinal cord injury was able to perform the study’s exercises three times as long. Participants also reported that the device was intuitive to use.

Now the team is aiming to test the device under more everyday settings. “In the next phase, we want to test our prototype outside the lab in the natural environment of future wearers and use the results to further improve it,” said Michele Xiloyannis, who also works at the Sensory Motor Systems Lab at ETH Zurich.

The prototype is far from being ready for market. Its actuator and control box currently weigh 4 kg making it cumbersome and impractical. But for those struggling with disabilities, the device is a great first step to a future that may give them more control over their movements.

The research was published in Nature magazine.

Effortlessly performing activities of daily living constitutes a cornerstone of our personal independence. Naturally, various forms of upper limb impairments can have a substantial impact on quality of life. We developed the Myoshirt, a textile-based soft wearable robot, or exomuscle, that autonomously follows the user’s movements and thereby assists the shoulder against gravity. With the Myoshirt, participants without impairments (n = 10, 5 male) experienced a delayed onset of muscular fatigue by 51.1 s (36.1%, P < 0.001), while during a functional task their muscular activity decreased by 49.1% (P < 0.001). Analogously, two participants with upper limb impairments due to a muscular dystrophy and a spinal cord injury experienced a delayed onset of muscular fatigue during unloaded arm lifts by 256.4 s (61.5%) and by 450.6 s (210.3%), respectively. Our evidence suggests that the Myoshirt is an effective tool that intuitively assists the shoulder during functional reaching tasks, with the potential of increasing the personal independence of people with upper limb impairments.