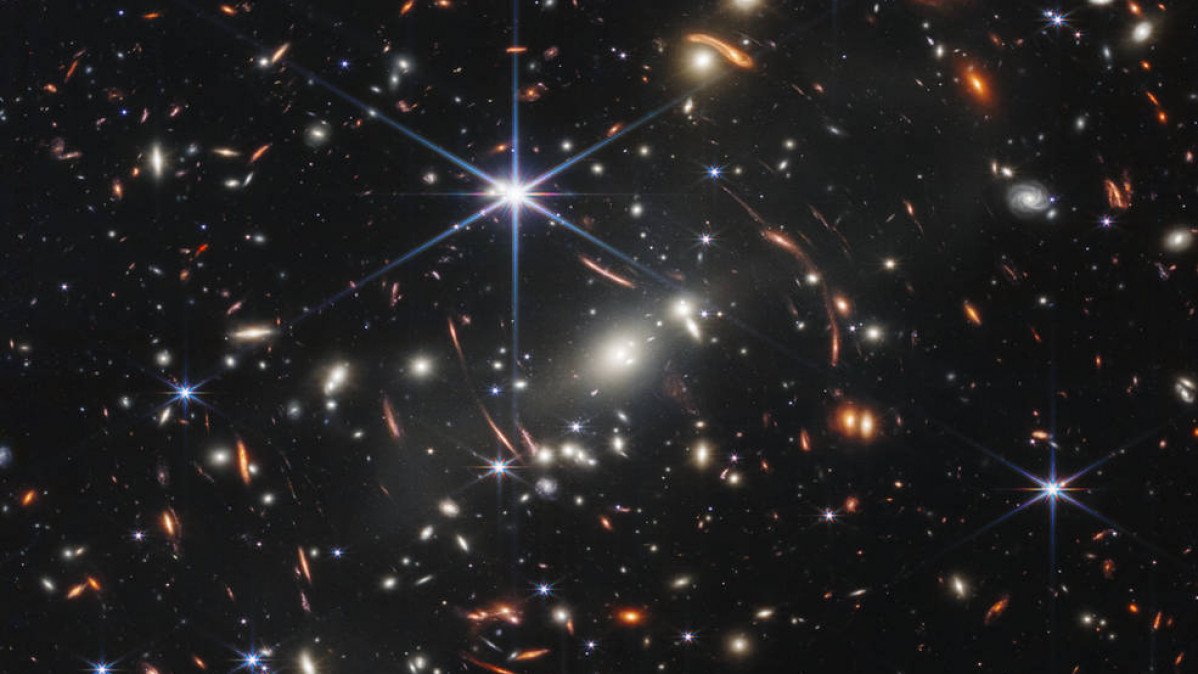 The James Webb Space Telescope has produced its first scientific, full-color image, and it’s a thing of beauty. NASA described it as the “deepest, sharpest infrared view of the universe to date.”

President Joe Biden had the honor of revealing the image to the world Monday during a live-streamed press event at the White House alongside NASA Administrator Bill Nelson.

The image — a highly detailed glimpse of a patch of sky roughly the size of a grain of sand held at arm’s length — shows a stunning collection of galaxies, some of them more than 13 billion years old.

Humans have never seen so far into space

The image contains a cluster of galaxies roughly 4 billion light-years away. Their gravity is strong enough to serve as a sort of lens, bending light from objects behind them in a way that gives even the most powerful telescopes an extra boost.

Prior to today’s image, the Hubble eXtreme Deep Field (XDF) image, released in 2012, was the farthest humans had seen back into cosmic history. The James Webb Space Telescope is able to see objects that appeared even closer to the Big Bang because it’s designed to capture the light waves that have been stretched b the physical expansion of the universe during the billions and billions of years since leaving the stars that emitted them.

“This image will not hold the ‘deepest’ record for long but clearly shows the power of this telescope,” astronomer Marcia Rieke, who led the team that built one of the cameras used to take the image, told the New York Times.

Today’s reveal only scratched the surface of what’s to come for James Webb this week — and in the coming years. Last week, NASA revealed a teaser image from James Webb as well as a list of cosmic targets it will show off in a separate event on Tuesday, July 12.

To capture those first images, James Webb observed NASA’s targets for 120 hours to collect five days’ worth of data.

Here are NASA’s five cosmic targets in the space agency’s own words:

“WASP-96 b (spectrum): WASP-96 b is a giant planet outside our solar system, composed mainly of gas. The planet, located nearly 1,150 light-years from Earth, orbits its star every 3.4 days. It has about half the mass of Jupiter, and its discovery was announced in 2014.

“Southern Ring Nebula: The Southern Ring, or “Eight-Burst” nebula, is a planetary nebula – an expanding cloud of gas, surrounding a dying star. It is nearly half a light-year in diameter and is located approximately 2,000 light-years away from Earth.

“Stephan’s Quintet: About 290 million light-years away, Stephan’s Quintet is located in the constellation Pegasus. It is notable for being the first compact galaxy group ever discovered in 1877. Four of the five galaxies within the quintet are locked in a cosmic dance of repeated close encounters.

“SMACS 0723: Massive foreground galaxy clusters magnify and distort the light of objects behind them, permitting a deep field view into both the extremely distant and intrinsically faint galaxy populations.”

Tomorrow’s event can be watched live on NASA TV via its YouTube channel (embedded above). Opening remarks will begin at 09:45 ET followed by the full unveiling of NASA’s first batch of science images starting at 10:30 ET. IE will provide live coverage of the event as it takes place.

A new era of astronomy

The James Webb Space Telescope is seen by many as a successor to NASA’s Hubble Space Telescope. Unlike Hubble, JWST isn’t orbiting Earth, and it will primarily make observations in the infrared spectrum with its incredibly powerful instruments.

Since the massive space observatory launched on December 25, 2021, NASA has worked hard to move it into its final orbital position at Lagrange Point 2 (L2), roughly 1.5 million kilometers (1 million miles) from Earth. L2 provides a relatively stable orbital trajectory and allowed James Webb to escape the Earth’s heat while remaining in perpetual sunlight. The Sun will never be eclipsed by the Earth, meaning JWST’s solar cells will constantly be harvesting energy. Once at L2, the James Webb team on Earth gradually unfolded the telescope’s massive 21-feet (6.5-meter) diameter gold-coated mirror and calibrated its cameras and sensors.

James Webb is the most powerful space observatory to date. The machine, which cost more than $10 billion, is expected to transform the fields of astronomy and astrophysics by shedding new light on some of the first stars and galaxies that formed after the Big Bang.

According to NASA, the observatory will be operational for at least five and a half years, and it could last for more than a decade. Unlike Hubble, which has received maintenance work post-launch, James Webb is too far from Earth for a crewed maintenance mission. Its operational timeline will also be limited by the fuel required to maintain its orbit, as well as the fact its instruments could degrade in the harsh space conditions of Lagrange Point 2.

Before its time is up, Jame Webb will make thousands of observations, providing us a new window into distant worlds. Among its targets are asteroids, distant, potentially habitable exoplanets, and some of the oldest stars in the most distant parts of the universe ever observed.

We’re at the very beginning of James Webb’s journey — and it’s one that will change humanity by providing us a new perspective on the vast cosmos surrounding the pale blue dot we call home.