Einstein once referred to quantum entanglement as “spooky action at a distance” and I’m guessing that if he were here today he would have something similar to say about the results of this study that were published on the PLOS One website in August 2014. Research teams from around the globe participated in the first successful non-invasive brain to brain communication from Kerala State, India to Strasbourg, France. It involved teams from Neuroelectrics, Starlab, and the University of Barcelona in Spain; Harvard Medical School and Beth Israel Deaconess in the USA; and Axilum Robotics in France. 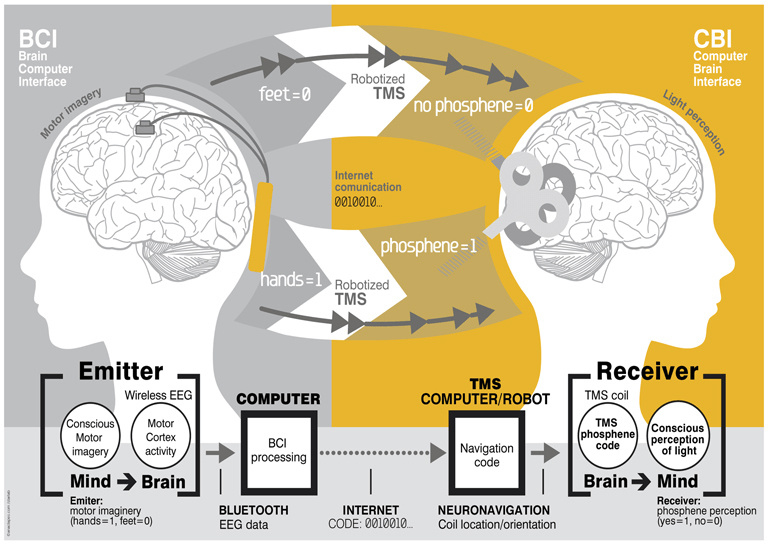 The teams worked on an experiment where an “emitter” subject sent a message over the internet to a “receiver” subject who relayed the message back. The experiment was approved by the Ethics Committee of the University of Barcelona and had permission from all test subjects.

First, a binary code was used to correspond with the letters in the alphabet like Morse code. The experiment began by the “emitter” subject (in India) receiving an e-mail containing a portion of the message; in this case a 1 or a 0. The subject used their hands for 1 and their feet for 0 to mentally move an object on the computer screen in front of them. With EEG (electroencephalogram) electrodes attached to their head, they sent the message through the internet to 3 receiver subjects (in France).

The receiver subjects while attached to a TMS (Transcranial Magnetic Stimulation) machine, were blind-folded and had ear plugs in to ensure that there was no peripheral nervous system cheating going on. Then they waited to receive the message.

The message arrived in the subjects’ brains in the form of biphasic TMS pulses. If phosphenes were produced in the occipital cortex then the subject saw a flash of light in their head. Seeing a flash corresponded to a 1 in code and not seeing anything corresponded to a 0. Then they used the code to unlock the message. The total test time was approximately 70 minutes and when the message was translated it read “hola” or “ciao”.