On 23 May 2022, Airhub Airlines Airbus A320 registered 9H-EMU operated flight D8 4311 from Stockholm Arlanda to Paris Charles de Gaulle on behalf of Norwegian Air Sweden with 178 persons on board. The weather at Paris CDG was poor due to cumulonimbus clouds with rain showers, causing limited visibility.

The flight was cleared for a Required Navigation Performance (RNP) approach to runway 27R. The Intermediate (ITM) controller at CDG twice reported the QNH altimeter pressure setting to be 1011 instead of 1001 mb. As a consequence, the approach was flown below the glide path.

The A320 was cleared to land by the Tower controller while descending around 280 ft below the descent profile. The Minimum Safe Altitude Warning (MSAW) alarm was triggered. The crew aborted the approach at a low height before the runway, without having acquired external visual references. The minimum radio-altimeter height was recorded at 6 ft above the ground, at 0.8 NM from the runway threshold. 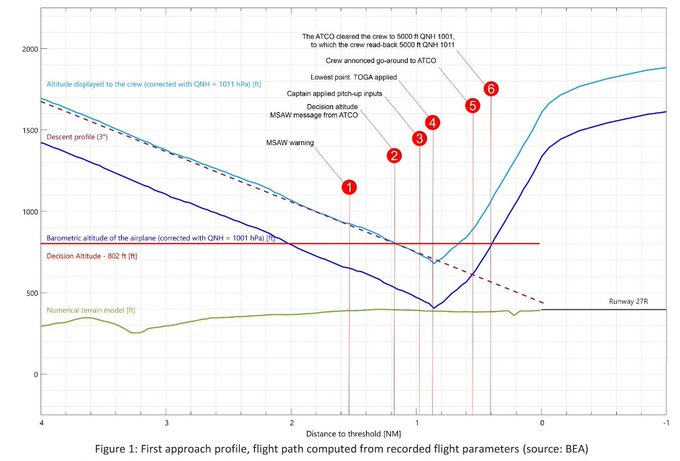 The second approach was also conducted below the glide path based on the same erroneous QNH and the MSAW alarm was triggered again. After acquiring visual contact with the runway, the crew corrected the path and landed without further incident.

The investigation by BEA France is still ongoing, but a preliminary report has been issued, which contains ten safety recommendations.