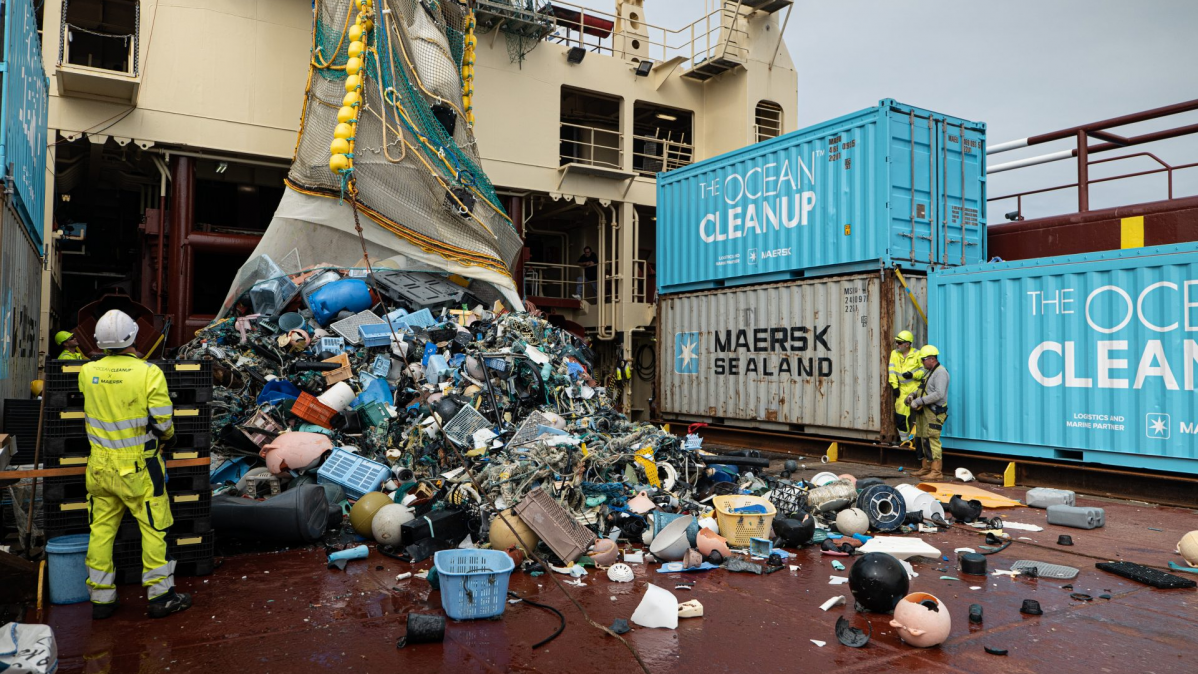 The first 100,000 kg of plastic has now been recovered from the Great Pacific Garbage Patch (GPGP), The Ocean Cleanup, a non-profit organization engaged in removing plastic dumped in oceans, revealed in a LinkedIn post.

Founded in 2013, The Ocean Cleanup is developing technologies that can help remove plastics that are discarded into the oceans as well as intercept them in the rivers before they enter the larger water bodies. The organization’s target is the GPGP in the North Pacific Ocean, where trash from countries in Asia, South America, and North America gathers into a large gyre of debris in the water.

How does The Ocean Cleanup plan to clear it?

As part of its strategy to clear up the GPGP, the organization built “System 001”, consisting of a floating barrier to collect the debris. Pushed by the waves, wind, and current, the barrier was slowed by sea anchors and tested for efficiency in 2018.

After a few improvements, the sea anchors were dropped in favor of a water-borne parachute that can slow the system down but improves the ability to capture plastic. Dubbed System 002, the apparatus is the first large-scale clean up system from the organization. After successfully testing the system over 12 weeks in 2021, it was assigned to its mission of collecting plastic ever since.

The continued efforts reached a major milestone recently, when the organization noted that it had cleared up 223,445 pounds (101,353 kgs) of plastic so far. This has happened through 45 extraction trips that have seen the system sweep about 1158 sq. miles (3000 sq. km) of the ocean, the size of Rhode Island.

In an Instagram post, the founder and CEO, Boyan Slat, shared some exciting findings from the recoveries they have made so far.

While this is a major milestone for the organization, according to their own estimates, the GPGP harbors about 100,000,000 kg of plastic waste. This would mean that the team would have to mark another 999 such milestones before it could theoretically clear up the GPGP, if no plastic enters the ocean from this moment onward.

The Ocean Cleanup has set the deadline as 2040 to reduce plastics in the oceans by 90 percent; and it has a two-pronged strategy to get this done. One is the development of System 003, a larger and more efficient clean-up system that collects plastic at a rate up to 10 times faster than System 002. Currently transitioning to System 003, the organization will use the newly developed system as a blueprint for the fleet of clean-up systems it plans to build in the future.

The other is the prevention of dumping plastic debris into the oceans. For this, the organization is developing and testing interceptor designs across river systems to help stop plastic debris before it reaches the oceans.