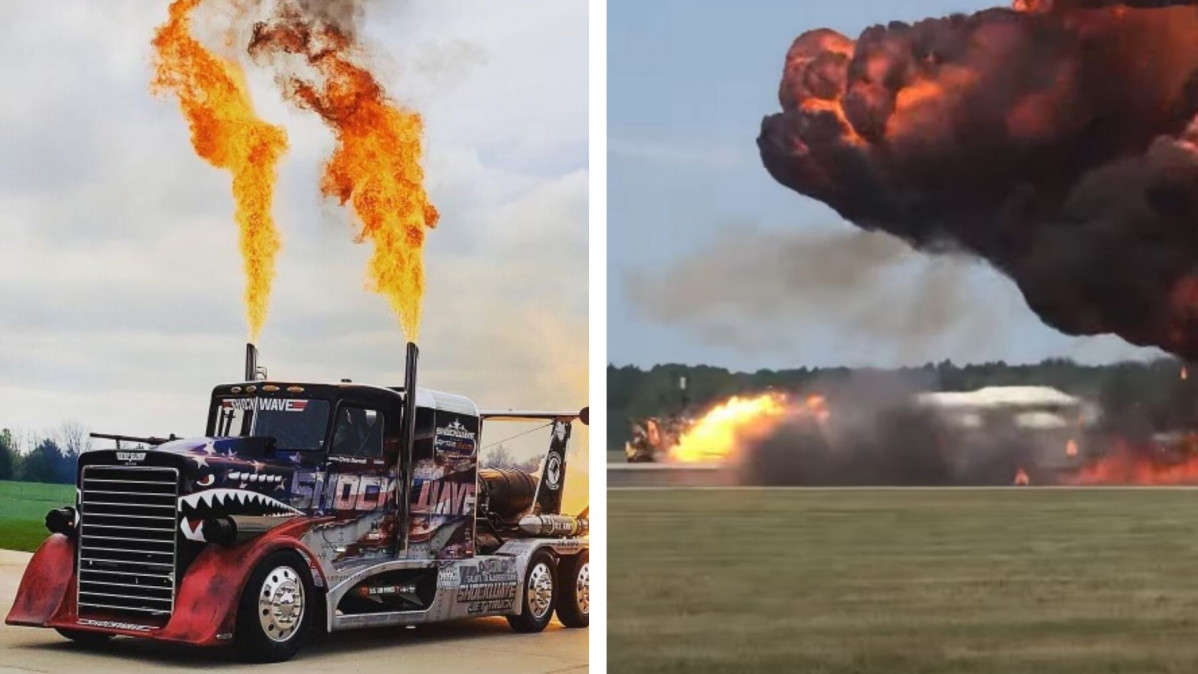 On the 2nd of July, 2022, at an air show in Battle Creek, Michigan, a jet-powered stunt truck lost control and crashed, sadly killing the driver. Shortly after the accident, videos were unveiled on the internet recording the entire tragic event.

We have included the footage at the end of this section if you want to view it for yourself.

Battle Creek police said in a statement that Chris Darnell, 40, was driving the Shockwave Jet Truck, a custom-built semi-truck with three jet engines that was going more than 300 miles per hour down the runway at the Battle Creek Executive Airport.

Police said earlier that it happened “during the pyrotechnic part” of the show at the Battle Creek Field of Flight Air Show and Balloon Festival.

Footage can be found on the internet shot by air show attendee Mike Westra, which shows how the truck was racing two planes and speeding down the runway before spinning and crashing. Another video shows a parachute deploying behind the truck right before the crash.

Westra told CNN that the thick plume of black smoke and fire seen in the videos as part of the show’s fireworks had nothing to do with the accident. In the videos, you can see the smoke and fire before the truck starts to spin out of control.

Westra said that emergency workers were already at the airport and quickly came to help. Westra added, “Within a minute or two they were putting water on the fire.”

Once the fire was out, Westra saw the charred wreckage and told CNN, “It came to rest upside down.”

The police department and the Battle Creek Fire Department are looking into the accident, police said.

A post on the festival’s Facebook page said that the rest of the air show on Saturday was canceled because of the crash.

The company’s website says that the Shockwave Jet Truck can reach speeds of more than 350 miles per hour. According to the website, Darnell drove the truck, which belonged to Darnell Racing Enterprises of Springfield, Missouri.

In a statement, Darnell’s father, Neal Darnell, confirmed his youngest son had died, writing the accident occurred “as a result of mechanical failure.”

“We are so sad,” Neal Darnell wrote. “Just one month ago Chris turned 40. He was so well-loved by everyone who knew him. Chris so loved the Air Show business.”

What is a Shockwave jet truck?

The first Shockwave truck was simply called Shockwave. At 376 miles per hour (605 km/h), it is the fastest full-size truck with a jet engine in the world.

The driver who recently lost his life drove one of these trucks at many air shows over the year. He also used the truck for racing against planes going 300 mph (480 km/h) in a rolling drag race and often won.

The now-destroyed truck used 400 gallons of fuel per mile, and when the afterburners were turned on, it used even more. At the end of a race, the truck needed two aircraft parachutes to slow down.