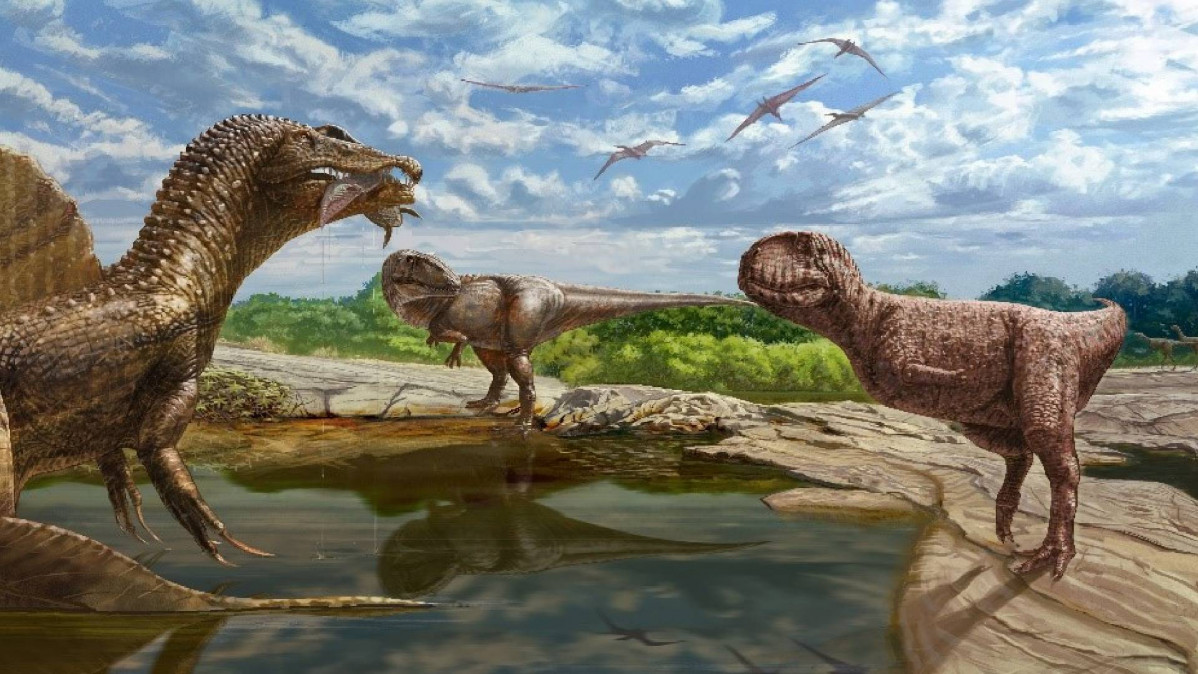 An Egyptian-American team of researchers announced on Wednesday something that seems unbelievable but is indeed true. The team discovered a new kind of predatory dinosaur, or theropod, from a famous fossil site in Egypt’s Sahara Desert, called the Bahariya Formation, according to a press release by Ohio University.

A still unnamed species of the abelisaurid group of theropods

The still-unnamed species is the first known account of the abelisaurid group of theropods from a middle Cretaceous-aged (approximately 98 million years old) rock unit known as the Bahariya Formation. Study leader graduate student Belal Salem says the strangest thing about this new discovery is that so many meat-eating predatory dinosaurs managed to live together in the same place at the same time.

“During the mid-Cretaceous, the Bahariya Oasis would’ve been one of the most terrifying places on the planet,” said in a statement Salem, a new student in the biological sciences graduate program at Ohio University. “How all these huge predators managed to coexist remains a mystery, though it’s probably related to their having eaten different things, their having adapted to hunt different prey.”

Much more to come

But the team’s researchers say this is not the only discovery to have come from the Bahariya site. Many discoveries were made in past expeditions.

“The Bahariya Oasis has taken on near-legendary status among paleontologists for having produced the first-known fossils of some of the world’s most amazing dinosaurs,” said  study coauthor Matt Lamanna, “but for more than three quarters of a century, those fossils have existed only as pictures in old books.”

The newly-discovered species is a well-preserved vertebra from the base of the neck that can best be described as a kind of bulldog-faced, small-toothed, tiny-armed theropod that is estimated to have been roughly six meters (20 feet) in body length. Along with Spinosaurus and two other giant theropods (Carcharodontosaurus and Bahariasaurus), the new abelisaurid fossil indicates that yet another species of large predatory dinosaurs once roamed what is now the Egyptian Sahara.

As impressive and unique as this discovery might be, the team of researchers says there could be even more dinosaurs in the Bahariya area to be uncovered in the future. “In terms of Egyptian dinosaurs, we’ve really just scratched the surface,” noted study coauthor Hesham Sallam. “Who knows what else might be out there?”

The Bahariya Formation could reveal the secrets of mid-Cretaceous African dinosaurs and the long-gone ecosystems in which they once lived and dominated. More thoroughly explored rocks of the same age in Morocco yield isolated bones but the Bahariya Formation appears to preserve partial skeletons of dinosaurs and other land-living animals with a relatively high degree of frequency.

The more bones that paleontologists can access, the more they can learn about a species. The Bahariya Oasis has a reputation for producing the associated partial skeletons that make it a particularly good source for dinosaur information.

It’s pretty amazing that in 2022 we can still discover new types of dinosaurs. What will be uncovered next? Perhaps the key to what caused their extinction?

The study was published in the Royal Society journal.

Numerous non-avian theropod dinosaur fossils have been reported from the Upper Cretaceous (Cenomanian) Bahariya Formation, Bahariya Oasis, Western Desert of Egypt, but unambiguous materials of Abelisauridae have yet to be documented. Here we report Mansoura University Vertebrate Paleontology Center (MUVP) specimen 477, an isolated, well-preserved tenth cervical vertebra of a medium-sized abelisaurid from the Bahariya Formation. The new vertebra shows affinities with those of other Upper Cretaceous abelisaurids from Madagascar and South America, such as Majungasaurus crenatissimus, Carnotaurus sastrei, Viavenator exxoni and a generically indeterminate Patagonian specimen (Museo Padre Molina specimen 99). Phylogenetic analysis recovers the Bahariya form within Abelisauridae, either in a polytomy of all included abelisaurids (strict consensus tree) or as an early branching member of the otherwise South American clade Brachyrostra (50% majority rule consensus tree). MUVP 477, therefore, represents the first confirmed abelisaurid fossil from the Bahariya Formation and the oldest definitive record of the clade from Egypt and northeastern Africa more generally. The new vertebra demonstrates the wide geographical distribution of Abelisauridae across North Africa during the middle Cretaceous and augments the already extraordinarily diverse large-bodied theropod assemblage of the Bahariya Formation, a record that also includes representatives of Spinosauridae, Carcharodontosauridae and Bahariasauridae.